Esmont and the Bank

June 17, 2013
There are places both on the map and sort of forgotten about and off the map of frequent travelers. The town of Esmont is one such place, it's just off a main east/west highway in Central Virginia. It had it's hayday from what I've learned mostly during the time of the roaring Twenty's and such...I think most of these place benefited mostly from the mining going on in the nearby town of Schulyer. Now the mining is limited and the town of Esmont has but a few families living in it's homes. The most noteworthy building I found to be the old bank building which was nice deep red from the brick used in it's construction. It's the only brick building in the town that I could find, but it's a nice three story building with some nice features to it with the name "Esmont Bank" still built into it's brickwork above the main doorway. With the sun out and mild temps I headed over to the quite town. I set up and painted for about three hours or so. One by one cars would drive by, I estimate maybe by the frequency of three in an hours time. The only time one stopped was to ask directions on how to get out of town. I suppose that's pretty normal for old Esmont. The painting is the result of spending a little time on a sunny day in Esmont, Va. Here's to them! 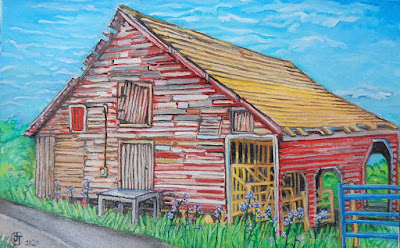 This is from a barn on Route 6 in Louisa County Virginia, its another oil using Stand oil as a medium. The stand oil is much thicker than regular linseed oil, much like the thickness of honey. It is linseed oil only the liquid has been taken out and what remains is a nice oil to paint with, it has a much better shine and luster once its used on the canvas w paints. The barn painted here is one old barn. I didn't get to talk to anyone about its history but one can notice its age when looking at the photo of it. Its been thrown together from older slates of wood, most likely from another free standing barn just reused on this one. It was repainted but one can see that some of the paint must have just flaked off. Its kind of a 'specked egg' arrangement but it keeps the outdoors "out" and the indoors "in"....with country living its the function that's important not the appearance.
Read more 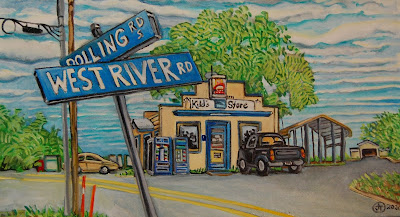 I've had troubles getting the lowdown view of this isolated country store w gas and sandwiches to go, the first two paintings were just down the tubes as far as visual interest. This one is better. I took in the outter view of cushion value of distancing around the store itself, and I think I won with a better feel to this scene. The station is buffeted by some space around it and distance too. Its a little better to view when there is some breathing room around it and not jammed into a small canvas space. I like the cars a little better in this one as well as leaving some visual detect-ability of the painting methods I used in creating this version of "Kidd's Store (#3)". Hope your entertained with its intensity and spacial relief.
Read more

This barn was rusting out from the top down, so it was very colorful to paint. My canvas called out to have some fun with it, so I did: the result is a small painting that changes tone from one side to the other.   True I did have trouble photographing it but still you can still see the warm browns and deep black/blues on the right side transversing over to cold white/greens and blacks on the other side...way weird eh!
Read more 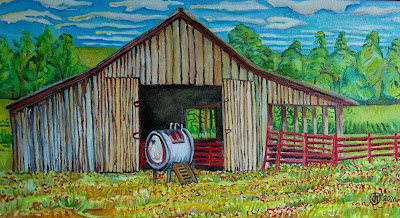 So I reworked that last subject which was that old country barn off of Rt. 6 and I got a completely different painting out of it. I took a head on view of it and worked with the perspective of the receding post holding up the right side of it. That gave me time to work on the sunlight upon the post holding the roof up. I began doing those posts with a simple brown and bear canvas cartoon. When I returned to that area I decided to make a color change to include a deep dark red mixed with some burnt umber which contrasted well with my Hansa Yellow w Flake White and light ocher sunlight side of those posts. It made for a welcoming effect but there was one troublesome moment of reality. That was how the right side of the painting was so warm with all that effect from the yellow and reds that the left side was very cold. It was something that I saw as a feature the viewer would have to forgive, I had the thought that it might be forgiven as simply the ch…
Read more 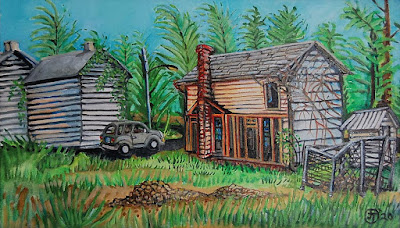 While driving on my routine trip into the city, I saw a home in Esmont that was half open, half of it was exposed to the elements. I was taken. I've been interested in showing the "in's' and out's" of country homes. Well there is was sitting among other homes like it. The difference being it was half gutted and open sided to view. I immediately wanted to take a photo and paint it, but I thought better of it and just let it simmer. About a month later I was snapping photos in its backyard. It was an enjoyable subject to paint.
Read more

John J Trippel
Schuyler, Virginia, United States
I painted caricatures in Art School and after. Then about twenty years ago I began to get a little more serious about my painting. Now after the mid-life change almost every artist goes through, I paint with the cityscape or landscape being the predominate focus of my art. I am painting with concentration on the feeling of the atmosphere.